The 5 Key Variables For A More Effective Training Program

How To Set (And Adjust) Your Macros For Any Goal

The variables we change within a client’s training program are what make the difference between staying stagnant for months on end, or actually progressing and finally seeing the changes in strength, performance, and physique you’ve been after.

These variables can be manipulated to change the adaptation you’re getting from your training, and while on paper two training programs can look really similar, small variations can create big change.

In today’s blog, you’ll learn the primary variables you can adjust within your program to achieve a better physique, faster.

The first variable in the list is volume. This is one people tend to manipulate first.

While volume is technically reps x sets x weight, most people tend to simplify it as a description of number of hard sets, that is sets taken to a significant Rate of Perceived Exertion (RPE) value.

Volume has been shown to be the primary driver of hypertrophy in studies, most notably in a study by Brad Schoenfeld and James Krieger.

“In a study of which I was a coauthor, Brad Schoenfeld and colleagues replicated the design of the Radaelli study, but with trained subjects.

One difference from Radaelli, other than the length of the study, was that nearly all movements were compound movements (bench press, military press, lat pull, seated row, squat, and leg press; the only isolation movement was leg extension). 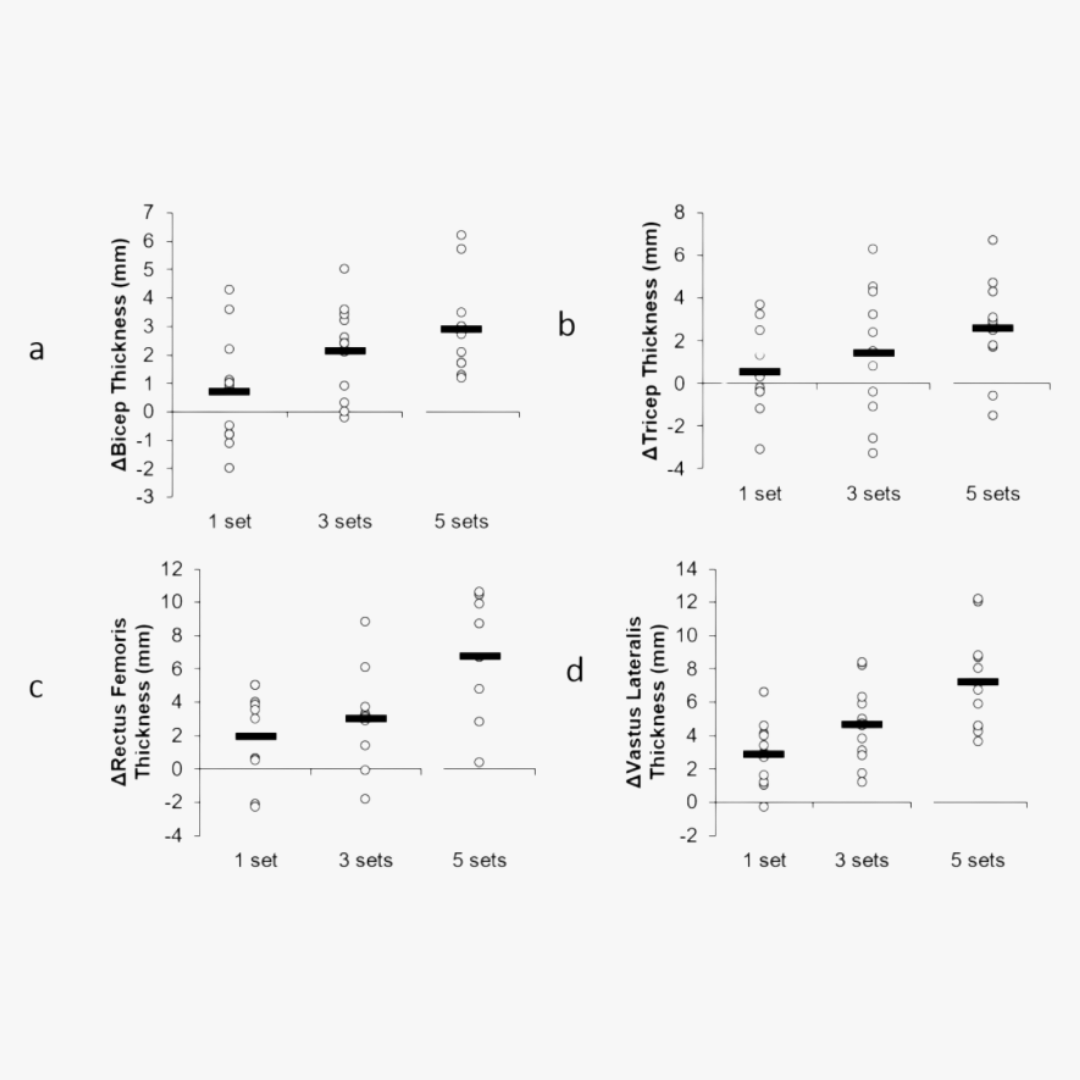 Shown above are the findings in thickness with each volume group.

Across the board the higher the volume, the greater the muscle thickness gain (although the tricep thickness wasn’t statistically significant.)

Even though the upper limit for volume to continually provide hypertrophy benefit is probably higher than would have been thought before these studies had been done, there’s still a practical upper limit.

The higher your volume gets, the more recovery resources it takes to be able to repair, recover, and do it again next training session.  At some point you exceed the amount of recoverable volume.

You can attenuate that to some degree by choosing movements that you specifically get a good stimulus from, and that have a good stimulus to fatigue ratio, but there will always be a limit at which you start to over-tax your body and can’t recover.

In beginners, you would start out by fairly evenly splitting volume between all muscle groups.

When you become more advanced you can start to move your relatively larger muscle groups down closer to a maintenance volume level and do more volume with your smaller/weaker muscle groups.

That allows you to allocate more volume for more growth to those lagging body parts while not overdoing it on total volume and still recover.

The muscle group you’re training can have a large part in where your number of sets falls within that range.

→ If you are doing too few sets per week you’ll know by lack of growth in that muscle group, and lack of disruption, i.e. pump, fatigue, and soreness. If you’re doing too much volume you’ll know because you get too sore and don’t feel recovered by your next training session working that same muscle group.

Intensity is the next variable and one that loads of people completely leave out of the equation.

Intensity is loosely “how hard you’re working per set.”

For our online training clients, we measure this with Reps In Reserve (RIR.) 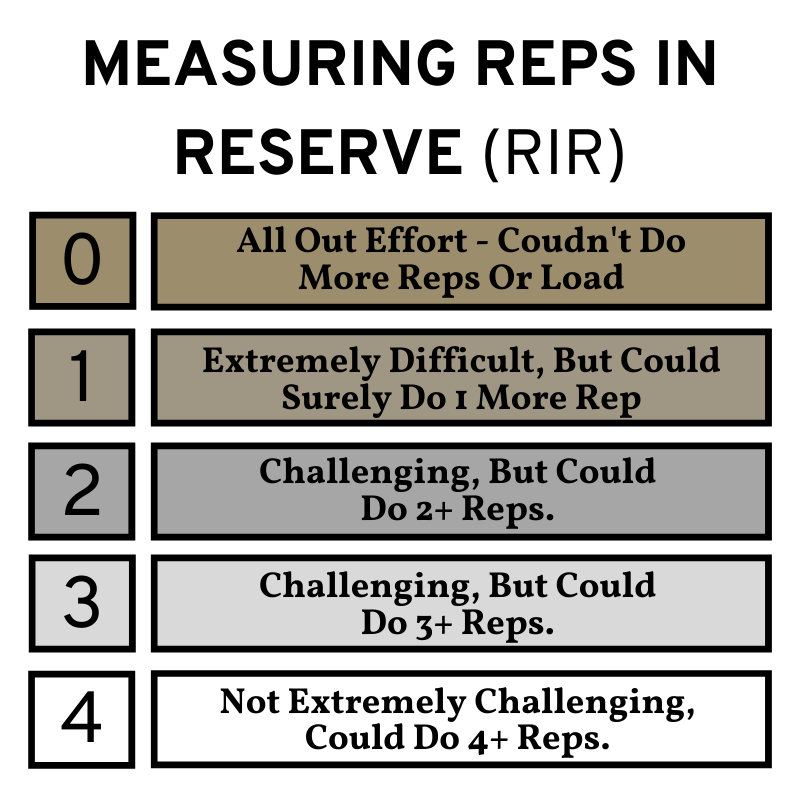 Intensity is also commonly gauged with an RPE, rate of perceived exertion, rating.

We prefer RIR with our clients because it is more tangible. There’s a hard distinction of a failure point rather than it being a subjective feeling that RPE can tend to be (especially in more beginner athletes.)

Most lifters you see in the gym, even if the workout is challenging, don’t lift with enough intensity. Most of the hypertrophy benefit comes from being within the 0-5 RIR range.

See, the closer you take a set to failure, the more muscle fibers you recruit and fatigue.

It’s thought that the last few reps of a set are by far the ones you get the most out of – the most “effective reps”, because they do the most to disrupt homeostasis and spark new muscle growth. (This is the concept of “effective reps”).

That doesn’t mean you need to or even should take sets to failure. As you get closer to 0 RIR your fatigue becomes exponentially greater and the lift takes more recovery resources.

We know that if we push the intensity too far (0 RIR/lots of sets to failure), we’ll create too much stress to recover from.  But we also know that if your RIR is too high (probably 5+), you won’t get much out of your set, as it will be very short on “effective reps”.

This works on a sliding scale depending on the type of movement you’re doing.

For those reasons, with our clients we typically will keep larger compound movements like barbell squats, deadlifts, etc. to 1-4 RIR, but take smaller isolated movements like a calf raise or lateral raise to 0-1 RIR.

Skewing too far in either direction can take your training session and make it much less effective than it could have been.

If you read our post on the different phases we use in hypertrophy training you know that rest periods are a big variable within this that can change the stimulus.

The phases range on a continuum from strength/neuro on one side (where you are lifting maximum weight for low reps and taking fairly long rest periods), to the other end of the range with metabolite training (where you’re lifting a bit lighter, focusing on the tension and taking shorter rest periods.)

The typical range in rest periods for most of our online clients range anywhere from 30 seconds up to 3 minutes, depending on the phase they are in and the stimuli we are going for.

→ If you are focused on hypertrophy you should be spending most of your time somewhere in the middle, resting for 1-2 minutes between sets, and allowing yourself enough recovery time to get as many reps as possible in your next set.

If you’re not taking enough rest, you’re not allowing yourself enough time to fully regenerate ATP (Adenosine Triphosphate), which allows you to produce more force and potentially eek out another rep or two on the following set.

When you can do that, you’re increasing your intensity and volume (these all tie in together) to stimulate more hypertrophy.

→ When your goal shifts to maximum strength, you’ll start to stretch those rest periods out a bit longer, up to 3-4 minutes.

→ When you’re working on your metabolic system you’ll shift rest periods down to 30-45 seconds to create an adaptation to the metabolite accumulation that happens within the muscle.

The key when your goal is to hypertrophy is to get in and gain the desired adaptation from those phases and then cycle back out when it’s no longer productive.

Frequency is how often you’re training a given muscle group per week.

Frequency and volume need to have an inverse relationship so you’re able to recover from each session. Meaning, if you’re only training a muscle once per week you’ll have 6 days to recover until you hit that muscle again (so you have more runway to take volume a bit higher.)

→ If you’re training the muscle 4 days per week you need to keep the per-session volume relatively low.

The 10-20 sets per muscle group per week still applies regardless of your chosen frequency, so you’ll divide that over each session.

With one time per week frequency you tend to lose steam by the end of the session, and end up using less-than-optimal movements and accumulate junk volume.

→ For example, if you have one ‘chest day’ per week, you’ll start out with a few great sets, then by the end of the session you’re failing because you’re already so fatigued, not because you’re getting a good stimulus to the target muscle group.

You can use any type of split that works in order to get your appropriate volume for each muscle group, it doesn’t have to fit into a generalized template, however there are some common ones that allow you to get 2-3 times per week frequency:

Tempo will be marked in your program as 4 numbers noting each of those parts respectively, for example 3121.

Tempo has more of an indirect effect on hypertrophy than a direct one, but is still a variable that can be impactful.

When you rush through reps, especially as a beginner, it can be hard to contract a muscle fully and “own the rep” vs. letting some momentum come into play and let the weight pull you back down.

Using a tempo that pauses in the lengthened position of a movement prevents you from using the stretch reflex and bouncing out of the bottom of a lift vs. using the target muscle to contract and bring you out of it.

Another benefit to a prescribed tempo is you’ll keep your reps consistent over the course of the set and training session to training session. That ensure that any progress you’re making in weight increases or reps per set are “true” vs. just using a bit more momentum out of the bottom, or powering through the reps faster.

The tempo is a way of keeping you honest, so to speak.

All of these variables together, can make a huge change to the stimulus and adaptation you’re getting from your training.

Given two training sessions made up of the same exercises, but varying just one of these can create a different program for better or worse.

If you know how to use these variables to work together you can create a program tailored to your specific goals that you can stimulate hypertrophy from while still being able to recover.

If you are lost on how to manipulate these variables for your own programming, or just want someone else to take care of it for you, click here to schedule a call with one of our coaches.

We’ll take the hassle out of putting the time and thought into all of this (and do it for you) so you can execute on a program customized just for you to suit your needs and goals. 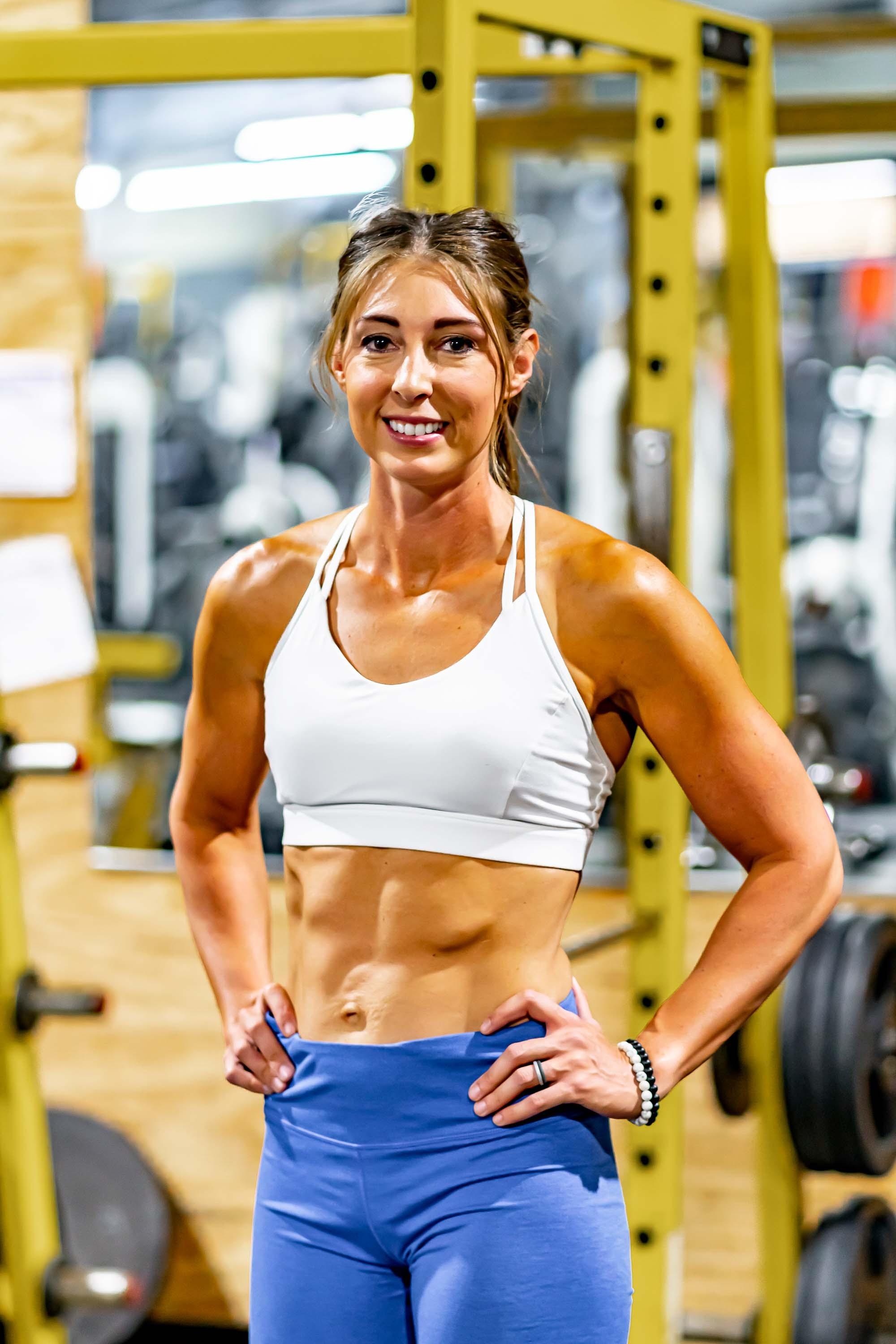 WRITTEN FOR YOU BY ANDREA RODGERS 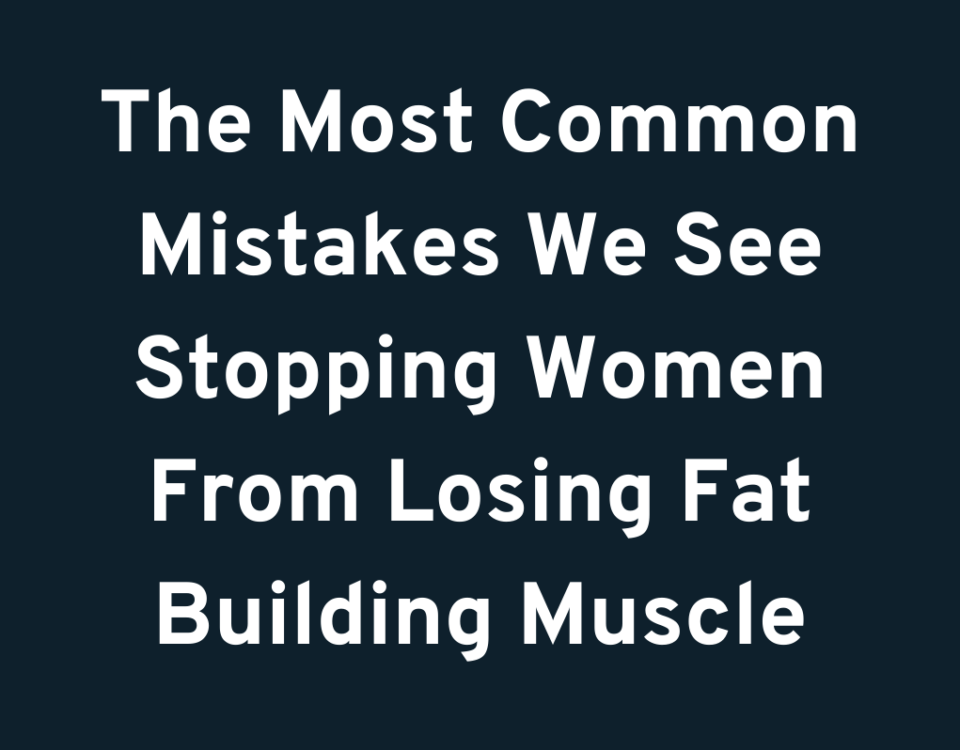 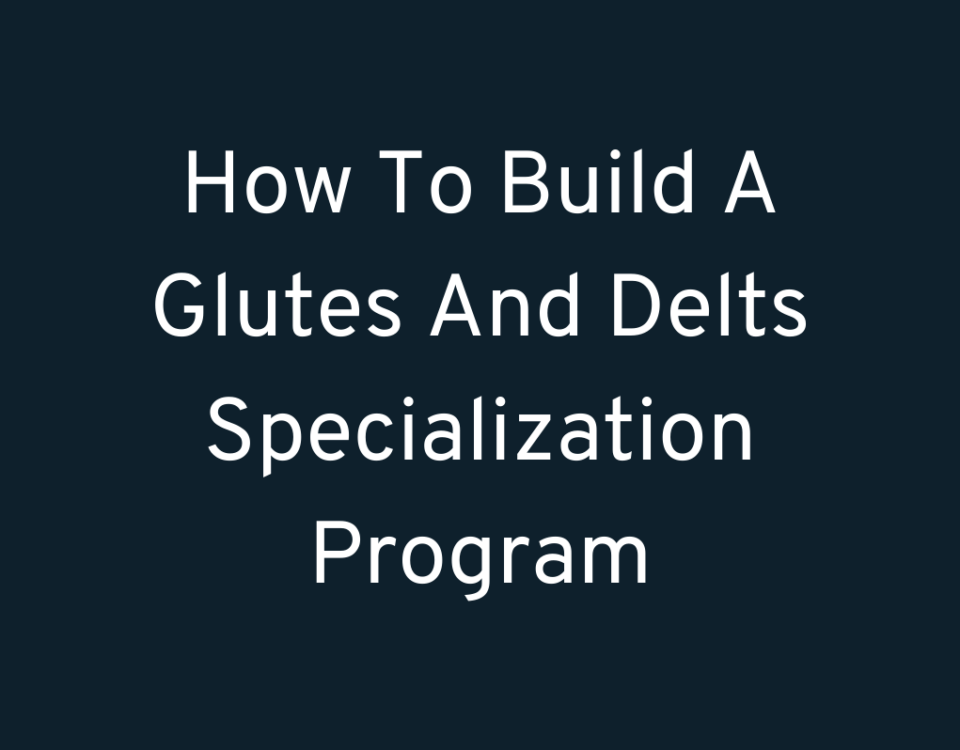 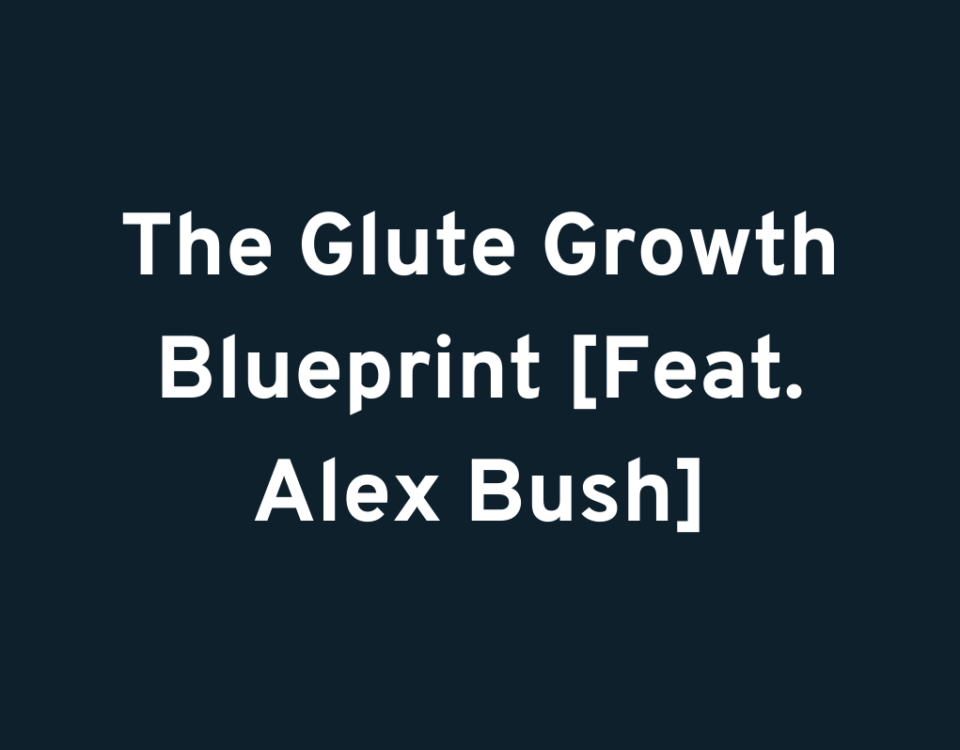